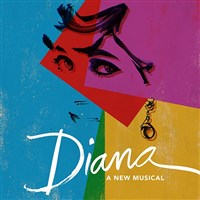 Join Perkiomen Tours for a day in New York's Big Apple to see "Diana" on Broadway!

Your day in New York's Theatre District will begin with some time for lunch prior to the performance of Diana at the Longacre Theatre, located at 220 West 48th Street.

"DIANA: The Musical" tells the story of one of the most beloved women of modern times. Engaged to a prince she barely knows, 19-year old Diana Spencer is thrust onto the world stage and, overnight, becomes the most famous woman in the world. As she struggles to navigate her way within the rigid structure of the royal family, Princess Diana finds herself trapped in a loveless marriage, eventually finding her voice by devoting herself to those in need. Forced to endure a media spotlight brighter than the world has ever known, Princess Diana defies all expectations to emerge as her own woman and create a legacy that will endure forever.

No stops will be made while traveling to or from our destination today.
11:00 AM Approximate arrival in New York City with free time for lunch on your own prior to the show
2:00 PM Diana: The Musical at the Longacre Theatre (220 West 48th Street)
Free Time
6:00 PM Depart for Home